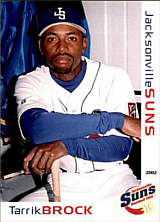 Tarrik Brock spent one month in the major leagues, making the Opening Day roster of the Chicago Cubs in 2000. In 13 big league games, he batted 2-for-12 (.167) with 4 walks. He was the first player to make his major league debut in Japan.

In 2014, he was appointed first base coach of the Houston Astros under manager Bo Porter, but was dismissed after the season following Porter's firing. In 2016, he was named first base coach of the San Diego Padres, taking the same job with the Pittsburgh Pirates for the 2020 season. Pirates outfielders Ben Gamel and Bryan Reynolds praised his work on improving their defense.