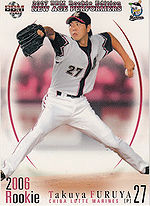 Takuya Furuya was drafted by the Chiba Lotte Marines in the 5th round of the 2005 draft, after having played for Nihon Tsuun in the industrial leagues. He led the minor Eastern League in wins, strikeouts and ERA (2.51) in 2006 and got called up to the big club for one start on August 30, but he got bombed for six hits and three runs in two innings, taking the loss. He struggled in the minors the next couple years. Returning to the Marines for four games in 2009, he surrendered eight hits, four walks and seven runs in just 5 1/3 IP.