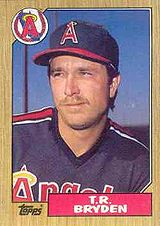 Pitcher T.R. Bryden played eight seasons in the minors and had a cup of coffee in the majors with the California Angels.

Bryden was born in Moses Lake, part of southeastern Washington state. He attended Enumclaw High School in Enumclaw, south of Seattle, and went to college in the eastern part of the state at Gonzaga, where he was a teammate of "Gorfax" Tom Gorman. T.R. was signed by California as a free agent prior to the 1981 season,. After several seasons in the minors, pitching mostly in relief, he made the Angels Opening Day roster in 1986 as a result of a strong spring training. He went 2-1 in 16 appearances for the club but posted a 6.55 ERA and was sent down to the Triple A Edmonton Trappers in midseason. After playing for the Trappers in 1987, he ended his career after pitching for the Portland Beavers in the Minnesota Twins chain in 1988. Overall, during his minor league career, Bryden won 45 games.