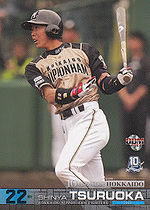 Shinya Tsuruoka was a Gold Glove winner in 2009.

Tsuruoka played for Mitsubishi Heavy Industries Yokohama in the industrial leagues after high school. He was MVP of a minor league All-Star game in Japan in 2005. He debuted with the Nippon Ham Fighters later that year, going 1 for 8. His first hit came off Josh Stewart. He hit .241/.251/.340 in 76 games in 2006 while splitting catching duties with Shinji Takahashi. Tsuruoka went 0 for 6 in the 2006 Japan Series.

Tsuruoka became the starter in 2009 as Takahashi moved to first base even more; youngster Shota Ono was inserted as the backup. He hit .221/.279/.293 but won Pacific League Gold Glove honors at catcher.