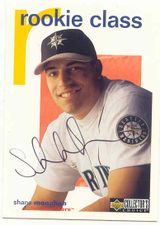 He is the grandson of hockey star Bernie "Boom Boom" Geoffrion, a member of the Hockey Hall of Fame, and the son of Hartland Monahan, who also played in the National Hockey League.

In 2007, Monahan admitted to using anabolic steroids and amphetamines during his major league career.