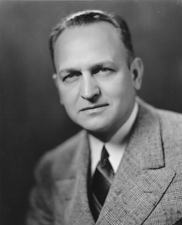 A first baseman and outfielder for three years in the minor leagues, Scott Lucas was most-known as a politician. Named after a US representative (Scott Wike), Lucas grew up in a poor family and worked his way through college, excelling both academically and athletically. Lucas hit .462/?/.644 in 34 games for the 1913 Pekin Celestials and .284/?/.362 in 61 games for the Bloomington Bloomers. Returning to Bloomington in 1914 and also spending time with the Peoria Distillers, he batted .241/?/.295 in 103 games and stole 16 bases. After graduating college, Lucas became a teacher but continued to play baseball, batting .259/?/.321 in 95 games as a Bloomington outfielder before retiring. He had hit .283/?/.361 in 293 games in baseball, with 42 stolen bases, 45 doubles, 13 triples, 125 runs and 305 hits.

Lucas then became a lawyer briefly before serving in World War I. Returning to his law practice, Scott became successful and eventually was the Illinois attorney general. In 1935, he won election to the US House of Representatives to fill a seat vacated by the death of the Speaker of the House. After two terms there, Lucas moved on to the Senate, defeating the candidate backed by the Chicago machine.

Lucas was known for championing farmers and the working class. In 1949, the two-term Senator became Majority Leader of the Democratic Party, but could not reconcile the liberal and conservative wings of the party and was deemed ineffectual in the role; medical problems, perhaps caused by stress, did not help matters. He suffered an upset defeat to Everett Dirksen in the 1950 campaign, leaving office after only two years as Senate Majority Leader. Dirksen would go on to a notable career in public office while Lucas faded from the spotlight and from history despite 16 years in Congress.

After leaving office, Lucas retired and spent time back in the world of athletics, golfing.