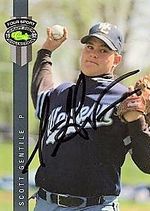 Pitcher Scott Gentile was the Montreal Expos' fourth-round pick of the 1992 amateur draft, taken one spot after pitcher Matt Williams. He began his professional career that year. A starter in 1992 and 1993, he converted to the bullpen after that and spent the rest of his career in a relief role. He played in the Expos system through 1996, joining the Detroit Tigers chain in 1997. He last played for the Baltimore Orioles organization in 1999.