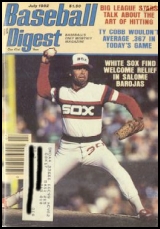 Salomé Barojas began his professional baseball career at age 18-19 with his hometown Cordoba Coffee Dealers in 1976 and went 3-1 with a 1.88 ERA in 15 appearances. He had a lower ERA than established Mexican stars such as Vicente Romo. A year later, he earned a regular role as long reliever and spot starter, going 5-4 with 6 saves and a 2.00 ERA in 126 innings over 41 games. While Cordoba had three other future Salon de la Fama members in Romo, Jose Pena and Ramon Arano, Barojas had a lower ERA than all three, trailing only part-timer Mitch Bobinger on the team. The next year, Barojas continued to shine as a middle reliever, with an 8-3 record and 4 saves in 40 games. His 2.45 ERA again made the youngster roughly comparable to the other great pitchers on the team, with Pena (2.19) and Diego Segui (2.32) ahead of him and Arano (2.51) and Romo (2.52) behind him. In 1979, Salomé moved into a swingman role, making 16 starts and 25 relief appearances. His ERA rose for the third straight year, to 2.61, and he went 7-6 with 3 saves. He was still second on the club in ERA, behind Arano and ahead of Segui. The Coffee Dealers moved to Reynosa, Tamaulipas and became the Broncos de Reynosa. Moving into the rotation for most of the season, Barojas went 12-9 with one save and a 2.56 ERA. Barojas became a closer in 1981 with the Mexico City Red Devils and went 12-3 with 13 saves and a 3.03 ERA. He tied Ralph García for the Mexican League lead in winning percentage.

He later became pitching coach for the Red Devils and Vaqueros Laguna. Salomé Barojas was voted into the Salon de la Fama in 2002.