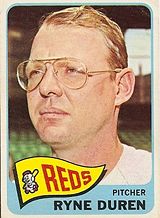 A hard-throwing relief pitcher who spent most of his career in the American League, Ryne Duren was frightening to bat against because he only intermittently had control of his prodigious fastball. Known to teammates simply as "Rhino", his thick "Coke bottle" glasses, a reputation for heavy drinking, and a tendency to throw warm-up pitches against the backstop only heightened batters' uneasiness. Following his playing career, Duren spent many years involved in Alcoholics Anonymous and the recovery movement.

Duren had a whole career in the minors before he came up to the majors in 1954 with the fledgling Baltimore Orioles and then with the inaugural Los Angeles Angels in 1961. He pitched in the minors for almost a decade, often as a starting pitcher, winning nearly 100 games. His best years in the majors were shortly after he came up for good, with the New York Yankees in 1958 and 1959. He led the American League in saves in 1958.

It was major news in Los Angeles when Duren was acquired early in the Angels' history. The expansion Angels were looking for players to become their first marquee names and Duren, along with Leon Wagner, was one of the early choices. Steve Bilko and Ted Kluszewski were also on the team that he joined.

He is the uncle of singer Blackie Lawless.