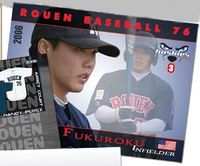 He played for the Rouen Huskies in Division Elite in 2006. He delivered the hit that allowed Flavien Peron to score the 1000th run for the team in 2006 during a game against the Paris Université Club.