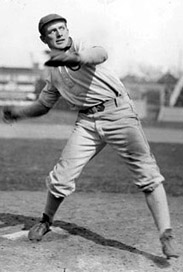 Pitcher Roy Patterson played seven seasons in the majors with the Chicago White Sox and was the winning pitcher in the first official American League game.

Born and raised in Wisconsin, Patterson played semi-pro ball for several clubs before beginning his professional career with the St. Paul Saints of the Western League in 1899, posting a 2-3 record. When the team moved to Chicago and became the White Sox and the league became known as the American League in 1900, he posted a 17-6 mark and paced the circuit with a .739 winning percentage. The league declared itself a major league the next year, and Patterson earned a victory against the Cleveland Blues on April 24th in what was the circuit's first official major league game. Later that season, on May 5th, he pitched a complete game with his team losing 21-7 to the Milwaukee Brewers; his pitching line that day was 9 IP, 25 H, 21 R, 14 ER, 2 W and 2 K. To be fair, his teammates committed 9 errors behind him, and it was a freak outing in a season during which he went 20-15, 3.37 in 41 games and pitched 312 1/3 innings. After being a workhorse on the mound through 1903, he saw considerably less playing time the next four seasons and did not play at all in the 1906 World Series.

Following his big league days, Patterson was with the Minneapolis Millers from 1908 to 1914. He became player-manager with the Winnipeg Maroons in 1915 but was fired in mid-season. He was back with the Millers from 1917 to 1919 during World War I. He later pitched for and managed the Wahpeton-Breckenridge Twins of the Dakota League in 1921 and 1922.

After baseball, Patterson took over his father's freight-hauling business. He died at age 76 in his hometown of St. Croix Falls, Wisconsin.