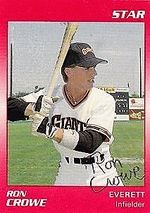 Utility man Ron Crowe did it all in the minors, but his wide skill set was not enough to earn him a major league promotion. He played seven positions in his career, including pitcher.

This biographical article is missing the person's: birth place
Retrieved from "https://www.baseball-reference.com/bpv/index.php?title=Ron_Crowe&oldid=1020243"
Categories: