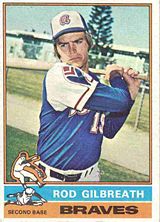 Gilbreath was drafted in the 3rd round of the 1970 amateur draft and played in the rookie league at age 17 with the Magic Valley Cowboys, hitting .278. The next season, 1971 he was with the Greenwood Braves under manager Clint Courtney, with a team that also featured Rowland Office, a 4th-round draft pick from 1970 who was the same age as Gilbreath. Gilbreath hit .309 while Office hit .302.

Both Gilbreath and Office played with the Savannah Braves in 1972, with Gilbreath again hitting a few points higher than Office. Gilbreath led the Southern League with 45 stolen bases that season. Rod came to the majors in 1972 for 14 games, as the second-youngest player in the National League (Office was the youngest).

1973 saw both Gilbreath and Office with the Richmond Braves, a team with a .231 batting average. As was becoming the norm, Gilbreath again beat Office by a few batting average points and he was up in the majors for 29 games where he hit .284.

Rod, however, had a problem in that he played third base and second base, positions that were filled on the Braves by Darrell Evans and Davey Johnson, both of whom hit 40+ home runs in 1973. That meant Gilbreath would spend another year in the minors, 1974, playing only 3 games in Atlanta, while Office became a major leaguer.

In early 1975, Johnson was gone and Gilbreath got his chance to play at the major league level in 90 games. He played even more often from 1976 to 1978, getting at least 350 at-bats each year although his average stayed around .245. Rowland Office also had around the same average in 1977 and 1978 for the Braves.

Gilbreath's last major league season was 1978, at age 25. In 1979 and 1980 he played for the Portland Beavers in the Pacific Coast League, in the Pittsburgh Pirates organization. He was a teammate of infielders Dale Berra and Vance Law.

Rod came back to the Braves as a minor league manager for a couple of years and as a front-office executive. By the mid-1990s he was director of minor league operations.