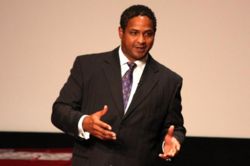 The son of Roberto Clemente and brother of Luis Clemente, Roberto Clemente Jr. spent three seasons in the minor leagues. Signed by the Philadelphia Phillies in 1984, his best season came in his final campaign in 1986 when he hit .229/~.308/.257 for the Charleston Rainbows. Knee and back injuries didn't help Roberto's chances and he gave up his baseball career in 1989.

Another view of Clemente Jr.

After retiring, Clemente Jr. worked with charities in Puerto Rico and Pittsburgh, PA to help continue his father's giving legacy. He also has worked as a baseball commentator, especially for Spanish-language audiences, but also as a guest analyst on English-language radio broadcasts when the Montreal Expos played some home games in San Juan in 2003 and 2004.

In December 2004, he was in the process of organizing an airlift of humanitarian supplies to Nicaragua in commemoration of his father's ill-fated 1972 relief mission, when the December 26 tsunami hit the Pacific rim. The natural disaster motivated him to ship the goods to affected countries in Asia.