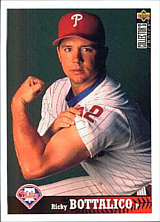 Ricky Bottalico was signed by the Philadelphia Phillies in 1991 after being discovered pitching in a semipro league. Ricky initially thought his path to the majors would be as a catcher, since that is what he did nearly exclusively in college as well as in sempro ball. Three years later, he reached the bigs as a reliever, becoming a valuable middle relief option in 1995 and moving to the closer's chair the next year. Bottalico racked up back-to-back 34 save seasons with the Phillies in 1996 and 1997, making his lone All-Star appearance in the former year, only for his ERA to balloon to 6.44 ERA in an abbreviated 1998. He bounced around to six different teams in his final seven seasons, rounding out his career with 40 games out of the Milwaukee Brewers bullpen in 2005. On the bump, he went 319 major league appearances without committing an error.