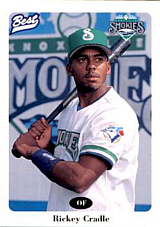 Rickey Cradle played in the major leagues for a little under two weeks in 1998 with the Seattle Mariners. An outfielder, he competed for time among a loaded bunch including Ken Griffey, Jay Buhner, and Glenallen Hill. In five games, he was 1-for-7 at the plate with a pair of RBI. Rickey played in the minors from 1991 to 1999, mostly in the Toronto Blue Jays organization. He had good plate discipline - his on-base percentage was usually 100 points higher than his batting average. He had moderate power, with as many as 13 home runs in a season, and some speed, with as many as 20 stolen bases in a season.