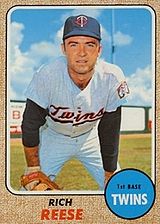 Rich Reese played ten seasons in the major leagues as a first baseman, almost all with the Minnesota Twins, the only exception being the first part of the 1973 season, which he played with the Detroit Tigers before re-joining the Twins in August. He had a career year in 1969 when he hit .322 with a .513 slugging percentage for the division-winning Twins.

Reese is the answer to a baseball trivia question. He has the dubious distinction of being the 383rd strikeout victim of Nolan Ryan in the 1973 season as Ryan eclipsed the single-season record of Sandy Koufax. It was also Ryan's 16th and final strikeout of the game and was the final out in the top of the 11th (and last) inning. The game, played on September 27th was the final start of the season for Ryan.

He is one of six major league players with the last name Reese through 2006.