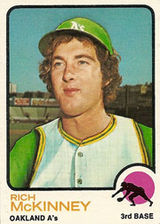 Rich McKinney came up to the major leagues with the Chicago White Sox in 1970. After hitting .271 in 114 games in 1971, he was considered an up-and-coming third baseman when he was traded to the New York Yankees in return for pitcher Stan Bahnsen before the 1972 season. However, in his sixth game for the Yanks, on April 22nd against the Boston Red Sox, he committed four errors to put himself in the fans' and manager's doghouse. Hitting .215 at the end of May, he was sent down to the minors and would not play regularly in the major leagues again until a call up by a short-handed Oakland Athletics team in 1977. He split time between first base and DH that year, hitting .236 with 6 homers and 21 RBI in 86 games to complete his major league career. In the meantime, he had played sporadically with the A's in 1973, 1974 and 1975, where he was used largely as a pinch hitter but did not see any playing time in the postseason.