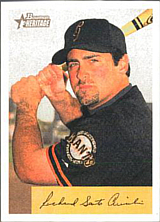 Playing for the Make-A-Wish Foundation, Rich came in second place on an athlete-centric edition of Food Network's Guy's Grocery Games in September 2015. In 2022, while he was chasing the Triple Crown, Aaron Judge revealed that Aurilia was his favorite player growing up.