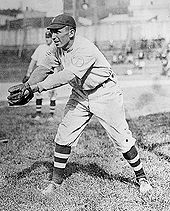 Ray Mowe played several games toward the end of the 1913 season at shortstop. His fielding stats were good, but he didn't hit much. He was a year older than outfielder Casey Stengel. Bob Fisher was the regular Brooklyn shortstop in 1913 but would not return in 1914.

"Federals Are After Mowe: The Pittsburgh Federals are making a strong bid for Ray Mowe . . . said to be slated to play at short field for the Dodgers. The Pittsburgh manager offers Mowe a two-years' contract with a salary a little in excess of that provided by his Brooklyn contract and with a raise of $100 a month the second year . . . It is said by his friends that Mowe will refuse to leave the Brooklyn team." - from Sporting Life, January 10, 1914