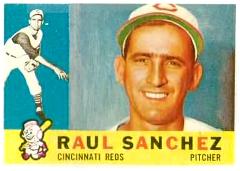 Cuban-born righthander Raul Sánchez was signed before the 1951 season by the Washington Senators as an amateur free agent. After a 12-12 record with a 2.66 ERA in a split season with the Big Spring Broncs of the Longhorn League and the Havana Cubans of the Florida International League in 1951, he made his major league debut with the Senators on April 17, 1952. Sanchez hurled a shutout for his first big league victory.

Sanchez spent several seasons back in Havana pitching for the Havana Sugar Kings of the International League after being sold to the Havana franchise by the Senators on March 18, 1954. Raul spent two years with the Havana club after that transaction before being obtained by the Cincinnati Redlegs as part of a minor league working agreement. He went go 3-2 with 5 saves in 38 games out of the Redlegs bullpen in 1957.

Sanchez was with with the Cincinnati Reds again briefly in 1960 and in one game against the Philadelphia Phillies triggered a wild brawl when he hit three opponents with pitches in the same inning. This was Raul's final trip to the major leagues and he finished with a 5-3 record with a 4.62 ERA in 49 appearances.

After baseball, Sanchez resided in Coral Gables, FL, where he worked in construction. He passed away on June 30, 2002, at the age of 71, in Pembroke Pines, FL.