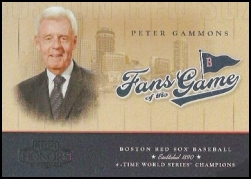 Peter Gammons began his career as a sports writer for the Boston Globe in 1969. He became well known for his Sunday baseball column in the Globe which featured his detailed, encyclopedic knowledge of the game. His edge as a sports writer was always knowing every player (star, journeyman or prospect), coach, manager and executive. He also had particularly detailed information about minor league and amateur players who were unknown to most people. His knowledge was most obvious during the 1994/95 player strike when he reported on what might happen if there was ever baseball again. In the 1990s he joined ESPN as a broadcaster and supplied the same detailed analysis that made him famous, only now in front of a camera.

For years, he had a regular column in the Sporting News, covering the American League beat while Bill Conlin covered the National League beat.

Gammons won the J.G. Taylor Spink Award from the Baseball Hall of Fame in 2004. Although he suffered a brain aneurysm in June 2006, Gammons returned to baseball in August to give out awards at a Cape Cod League game. He returned to ESPN in 2007 and moved to MLB Network a few years later.

A musician, Gammons released an album titled Never Slow Down, Never Grow Old in 2006. He is also known for dropping obscure musical references in his columns.