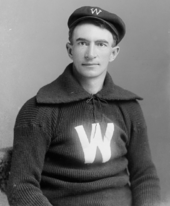 Nicholson was born in Blaine, OH, in far-eastern Ohio near Wheeling, WV. He played for Wheeling and a minor-league St. Louis team during part of 1888, and came to the majors for 24 games with the 1888 Detroit Wolverines, a team which featured the famous Big Four. Nicholson showed good power, posting a higher slugging percentage than most of the team regulars.

He was player-manager for Wheeling in 1899.

According to a genealogical post by his great-grandson, Nicholson had a successful shoe-repair business and was at one time mayor of Bellaire (1903-1906).