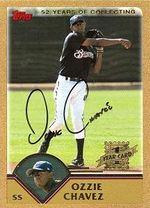 Ozzie Chavez played in the minor leagues from 2001-2013 with a year out for playing in the independent Atlantic League in 2011. He was a middle infielder throughout his career with shortstop being his primary position. Chavez played at the AAA level on multiple occasions, but was never called up to "The Show." In his twelve minor league seasons he hit .245/.306/.322 while appearing in 1,161 games. Chavez also played winter ball for a number of years in the Dominican League.

Chavez joined the Boston Red Sox organization in 2015 and has served as a coach and manager in their organization since that time.

In 2020 he was scheduled to manage the DSL Red Sox Blue before the season was cancelled due to COVID-19.

This page is in need of some additional content. Please help the Bullpen by expanding it, or learn how to contribute.
This manager's article is missing a managerial chart. To make this person's article more complete, one should be added.
Retrieved from "https://www.baseball-reference.com/bpv/index.php?title=Ozzie_Chavez&oldid=1252672"
Categories: