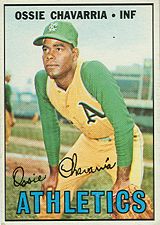 Ossie Chavarría played two seasons with the Kansas City A's, their last in Kansas City, as a utility man. In 124 games, he hit just .208 with 2 home runs. Ossie had played for the Panamanian national team in the 1959 Central American and Caribbean Games, hitting .286 with 3 runs scored and 3 steals in a utility role (third base, first base, right field), with error-free defense. He tied for third in the event in swipes, behind Bernard Hoftyzer and Mario Mendible.

After retiring, Ossie became an umpire, working in the minor leagues, including the Northwest League, and college games. He also umpired numerous international events, including the 1992 Olympics, the Baseball World Cup, Pan American Games and Intercontinental Cup. He coached for Team Canada in the 1987 Pan American Games. His son, David, reached AA as a player then became a coach.