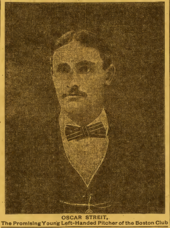 Oscar Streit pitched two years in the majors. He appeared in 10 games, mostly as a starter, and mostly for the Cleveland Bronchos in 1902. He also had nine seasons in the minors, likely winning over 100 games (he is shown with 94 wins, but records are missing for some of the teams).

Through 2019, he is one of four major league players from Florence, AL. He is the only big league player with the last name Streit. However, there have been about 30 major leaguers named Oscar.

"The cranks had a chance to view the work of young Oscar Streit, the clever southpaw of the Washington O. H. team yesterday. He and his team were stacked up against the Sham­rocks, with Tannehill in the box. Streit was wild and gave numerous bases on balls, and the visitors were easily defeated. It is the opinion of those who saw him pitch that he will not do. But the same has been said of others." - a hasty judgment by a writer in Sporting Life, October 17, 1896, before Streit embarked on his minor league career the following year

"Streit did finely to win his first League game, and away from home. It showed that he is made of the right stuff, and has got plenty of nerve and grit." - Sporting Life changes its mind, April 29, 1899

"Oscar Streit has been released. He had pitched seven (sic) games and lost every one. At least three of these defeats were the result of rotten support." - Sporting Life gives Oscar some support in 1902