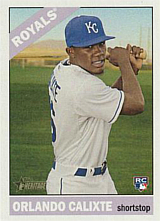 On June 5, 2017, playing for the San Francisco Giants, Orlando Calixte unleashed one of the worst outfield throws ever seen.

Playing left field against the Milwaukee Brewers with runners on second and third in the 1st inning, Calixte caught a fly ball that was not hit particularly deep by Hernan Perez and, in an attempt to keep Eric Sogard from advancing, threw home. Unfortunately, his throw was about 50 feet too high and halfway between home and third, bouncing out of play too far for pitcher Jeff Samardzija, who was backing up the play, to stop it. Not only did Sogard score easily, but Domingo Santana was also awarded a free advance home on the error as Calixte turned his back in shame. The play seemed to provide some levity that allowed the Giants to dominate the remainder of the game, winning 7-2 behind a strong pitching effort from Samardzija.

Despite the gaffe, Calixte was able to see his most big league action that season. Having previously played 2 games with the world champion Kansas City Royals in 2015, he batted .143 (7-for-49) with his only extra base hit, a two-run double as part of a 2-for-5 day in his big league return on May 30, 2017. He was last seen in the Seattle Mariners chain in 2019.