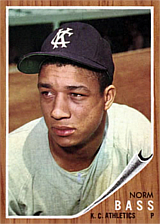 Norm Bass played major league baseball, pitching with the Kansas City Athletics from 1961 to 1963, but arthritis shortened his career. [1] Additionally, he played football, first at Pacific and later in the upstart American Football League as a safety in 1964 but again had health problems. He eventually became a top Paralympics and international table tennis/ping-pong player.

Bass pitched 65 games (34 starts) for the Kansas City Athletics, finishing with a 13-17 record and a 5.32 ERA. In his rookie year with the A's, he was 11-11. Bass signed with the club before the 1958 season and made his debut with the Pocatello A's. He worked his way to the major leagues, making his debut at age 22. As a hitter, he hit his lone major league home run in 1961.[2][3] Bass pitched in one minor league game in 1965, a complete game victory, but his baseball career ended after that performance.[4]

Having played football and baseball in college, Bass played safety for the Denver Broncos in 1964 after arthritis cut short his 1964 baseball season. Unfortunately, the arthritis forced him to retire from football as well. His brother, Dick Bass, played running back for the Los Angeles Rams in the 1960s.[5]

Bass took up table tennis in the 1970s and became a ranked player in his age groups. He played for the United States Paralympic table tennis team in 1998 and won a Bronze Medal at the 2000 Paralympic Games in Sydney, Australia.[6][7]

Bass wrote the autobiography Color Him Father: An American Journey of Hope and Redemption. [8]