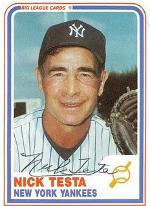 Catcher Nick Testa was sent from the Walden Hummingbirds of the North Atlantic League to the New York Giants before the 1947 season. Nick was assigned to the Seaford Eagles of the Eastern Shore League. He appeared in 110 games and hit .292 his first year in pro ball and the fact of the matter is that his 1947 hitting average would be his highest in 16 seasons of professional baseball.

Throughout most of the 1950s, Nick hopscotched around the minors in places like Seaford, DE, Trenton, New Jersey, Sioux City, Iowa and Dallas, TX. He ate in greasy diners, stayed in shanty motels and rode in rickety buses. But for a brief period in 1958, he ate in fancy restaurants stayed in plush hotels and rode jumbo jets. Since 1900 and at this time over 600 players had appeared in only one big league game and one of them was to be Testa, the catcher from the Bronx.

Nick talked about his experience with the San Francisco Giants and the game that put him in the Baseball Encyclopedia. "I made the club as a third-string catcher. My first recollection was going to the Los Angeles Coliseum to open the season. Baseball had crossed the Rocky Mountains. I couldn't believe it. I remember the mad fans and the fence in left field that seemed like it was right behind the shortstop. The attendance was 78,672 and the date was April 18, 1958. The Dodgers won that game 6-5 despite Hank Sauer hitting two home runs.

We went on to San Francisco where we had a parade. I rode in the same car as Willie Mays, my number one favorite as I got older. On April 23rd, we were playing a marathon game against the St. Louis Cardinals at Seals Stadium. I got into the ball game late in the game. Marv Grissom was pitching. A guy hit a pop fly so I went back to the screen. The ball started drifting to the first base coaching box. I couldn't catch it. I got an error without ever touching the ball. One game, one error. Lifetime fielding average .000.

We loaded the bases in the bottom of the 11th inning with nobody out. I was the on-deck batter. Daryl Spencer was at bat. He hit one into the wind and it goes out for a grand slam. It was nice to win the ballgame, but as he rounded home plate, I shook his hand and said to him, 'My only chance to get an at-bat and you hit one with the bases loaded!'"

A few days later the Giants made the 30-year-old Testa a bullpen coach and he was with the Giants for the rest of the season. Nick returned to the minors in 1959, play five more seasons and end his minor league run with the Yakima Braves in 1964 with a career .268 hitting average in 1,358 outings. Nick also fielded the catcher's job at a .988 percentage. During this era Testa journeyed to Japan and tried his luck with the Nippon Pro Baseball teams, but failed to hit well and returned to the United States.

Testa was a physical fitness director in New York City at the time, continued as an active player until he was sixty years old in the late 1980s, playing in the Canadian Summer Provincial League. Nick was also a University of Delaware graduate in physical education. He later earned his master's degree from New York University. Nick was a health instructor and baseball coach at Lehman College in New York for 20 years. For several seasons he pitched batting practice for the New York Yankees and the New York Mets.

Unconfirmed reports from the autograph collecting community suggested Testa died in 2013 or 2014, or as far back as 2010, though solid proof of his passing was not provided. He truly died in November 2018.