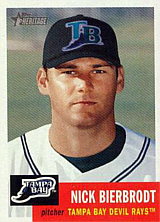 In June 2002, Nick Bierbrodt was shot twice in the chest in what his team, the Tampa Bay Devil Rays, called a "random act of violence"[1]. He was in Charleston, SC rehabilitating with the Devil Rays' AAA franchise and was looking for a late meal when he ran into trouble. He recovered from the gunshot wounds to return to the major leagues less than a year later. In 38 big league games (25 starts), with four teams in four seasons, Nick was 6-9 with the demonic 6.66 ERA. Bierbrodt was later 2-4 with a 4.84 ERA for the 2007 Brother Elephants of the Chinese Professional Baseball League before being released. He retired following the 2011 season, spent in the Baltimore Orioles chain.