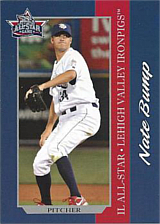 Pitcher Nate Bump was on the postseason roster of the Florida Marlins when they won the World Series in 2003 after making his major league debut earlier that year. He did not play in the World Series but made 2 appearances in the NLCS against the Chicago Cubs. In a three year career as a middle reliever, Nate was 6-7 with a 4.68 ERA in 113 games (148 innings).