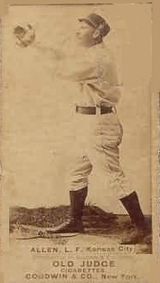 Myron Allen played four years in the majors, at a relatively advanced age (ages 29-34). He was a regular on the 1887 Cleveland Blues, who finished last and did not win many games, but Allen, although the oldest regular, hit higher than the team and league average. He led the team in home runs and was among the team leaders in doubles and triples even though he had a hundred fewer at-bats than a couple of the other regulars.

Sporting Life in January 1891 indicated that although Allen had "led the New York State League outfielders" the previous season, he was retiring and had purchased a business in Hudson.