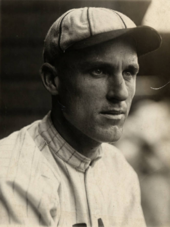 Maurice Montague "Molly" Craft was primarily a pitcher in the majors, but afterwards in the minors he increasingly played other positions as well. He was with the Washington Senators for four years, ages 20-23, pitching in a total of 29 games, mostly in relief. He was eight years younger than teammate and fellow pitcher Walter Johnson.

Molly was born in Portsmouth, VA, began his pro career in the Virginia League and then came to the majors. Afterwards, he continued to pitch in the minors from 1919-1927, ending up again with several seasons in the Virginia League. In those last seasons in Virginia, he hit over .300 each year with moderate power. From a pitching standpoint, his best year was 1920, when he went 15-6, split among two teams - for one of them, the Toronto Maple Leafs, he went 8-0.

As a position player, he was mostly in the outfield and at first base.