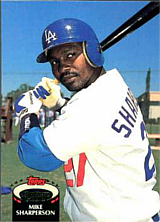 Mike Sharperson was signed after being drafted in the secondary phase of the 1981 amateur draft by the Toronto Blue Jays and scout Tim Wilken.

Sharperson was killed in a car accident at age 34. At the time of his death, he was playing in the San Diego Padres organization and was on his way to join the Padres for a possible big league promotion.