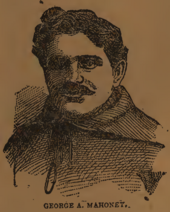 George "Big Mike" Mahoney was one of the earliest players from Georgetown University to come to the majors. He appeared briefly in both 1897 and 1898 for the Boston Beaneaters, playing first base, pitcher and catcher in his four games. The 1897 team won the National League pennant.

The May 15, 1897 issue of Sporting Life refers to him as "George A. Mahoney", and has a picture of him. The paper reported that Frank Selee had signed him, and while he was not used as a pitcher in Boston, was expected to get into a game on "the Western trip". Mahoney in fact made his debut on May 18th.