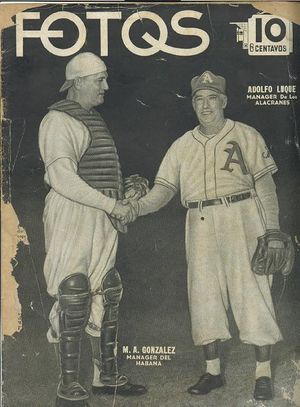 Cuban-born Mike Gonzalez had a seventeen-year career as a catcher, all in the National League. He played seventeen years in spite of being out of the majors in the middle of his career, playing for the St. Paul Saints in 1922 and 1923. He also played for the Cuban Stars, a mixed-race team that featured Cuban players who could play in the major leagues, and others who were restricted to the Negro Leagues by the color line.

After his playing career ended, Gonzalez spent 1933 as a player/coach for the Columbus Red Birds. He was later a longtime St. Louis Cardinals coach and served two brief stints as the club's manager, becoming the first Cuban to manage in the majors.

The book Sport in Cuba indicates that Gonzalez bought the Havana Reds in 1946, a team he had previously managed. He owned the team until it was forcibly dissolved after the Cuban Revolution in 1961.

Gonzalez is often cited as the originator of the phrase "good field, no hit".