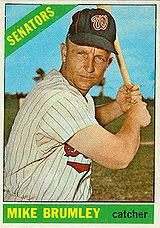 Mike Brumley was a catcher who played briefly in the major leagues. He was a Topps All-Star Rookie Team selection following his rookie year in 1964, representing despite a modest .244/.309/.312 line with 23 extra base hits in 136 games. He would only play 88 more games over the next two seasons before it was over. His son, also named Mike Brumley, was a major league infielder and minor league manager.