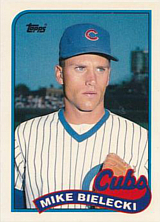 Mike Bielecki was signed as a secondary phase selection in the 1979 amateur draft by the Pittsburgh Pirates and scouting director Murray Cook. A fourteen year big leaguer, his best season came in 1989, when he was 18-7 with a 3.11 ERA for the Chicago Cubs and finished 9th in Cy Young Award voting. He pitched three of his four career shutouts that year while establishing career marks in innings (212 1/3 innings), strikeouts (147) and complete games (4). Mike spent most of the rest of his career with the Atlanta Braves, missing the team's trip to the World Series in 1995.