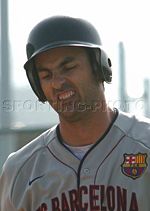 Mora was with Spain for the 2005 Baseball World Cup, going 0 for 6 with a walk and 3 strikeouts as the backup to Dewis Navarro. Miguel had 2 passed balls and allowed 5 steals in 5 tries.