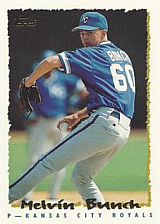 Melvin Bunch joined the Kansas City Royals pitching staff in 1995 after never having pitched above A+ ball in their farm system. He made 13 appearances to the tune of a 5.62 ERA and 1-2 record in 40 innings, returning only briefly to the bigs for a 5 game cameo with the Seattle Mariners in 1999.

Bunch also played 8 seasons in the minors, perhaps most notably going 10-2 as a starter for the 1999 Tacoma Rainiers. He then had three successful years in Japan with the Chunichi Dragons.