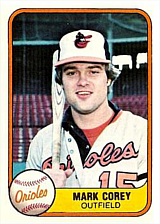 “Take the worst case of hemorrhoids you've ever had and triple it." - Mark Corey, describing learning how to catch in Peter Golenbock's The Forever Boys

Outfielder Mark Corey had a great start to his minor league career with the 1976 Bluefield Orioles, dominating the rookie Appalachian League while winning the Triple Crown - he paced the circuit with a .400 batting average, 17 home runs, and 59 RBIs in just 70 games.

In 1989, he played for the St. Petersburg Pelicans and the Orlando Juice of the Senior Professional Baseball Association. Corey's combined batting average was .226 as he played 12 games; 6 were for St. Petersburg and 6 for Orlando.