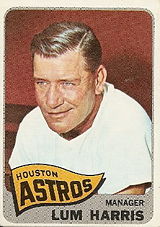 Pitcher Lum Harris played six seasons in the majors with the Philadelphia Athletics and Washington Senators, and in five of those six years, his club finished in seventh or eighth (last) place. He holds one very unenviable major league record: with the Athletics in 1943, he was charged with the loss in 13 consecutive appearances, on his way to going 7-21 on the season and leading the American League in losses. Harris entered the Navy in August 1944 and was discharged in January 1946. He came back to pitch two more seasons.

After his playing career ended, he was a Chicago White Sox coach from 1951 to 1954. He was a member of the Baltimore Orioles staff from 1955 to 1961 and was the club's interim skipper in 1961 as well. The next year, he joined the expansion Houston Colt .45's as a coach, and he became the team's manager in 1964. Harris managed the 1967 Richmond Braves then moved up to become skipper of the Atlanta Braves in 1968 and led the club to the postseason for the first time in Atlanta history the following season. Harris retired in 1972. He died of diabetes in 1996 at age 81.