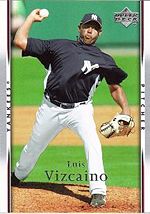 Even though he was out of a job in 2011, Luis Vizcaino still managed to get himself suspended for failing a drug test. On June 29th, the Commissioner's office announced that he had been suspended for 50 games for testing positive for metabolites of Stanozolol, a type of steroid. The suspension would become effective only if he signed with another major league organization.

In 2007, Vizcaino won two games in a day for the New York Yankees; it would be six years until Brian Duensing became the next major leaguer to perform the feat.