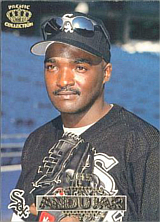 Pitcher Luis Andújar played parts of four seasons in the majors with the Chicago White Sox and Toronto Blue Jays.

Signed by White Sox scout Juan Bernhardt as a 17 year-old in 1990, Andújar began his pro career the following year with the GCL White Sox, going 4-4 with a 2.45 ERA in 10 starts. He spent 1992 with the South Bend White Sox, for whom he was 6-5 with a 2.92 ERA in 32 appearances. He split the 1993 campaign between the Sarasota White Sox and Birmingham Barons, winning 11 games and posting a 1.93 ERA between the two clubs. He struggled to a 4-7 mark between two clubs in 1994 and had elbow surgery following the season.

Andújar had his finest minor league campaign in 1995, going 14-8 with a 2.85 ERA in 27 starts for Birmingham. He threw a no-hitter against the Memphis Chicks on August 8th and was named Southern League Pitcher of the Year. He earned a September call-up with the Sox and made his debut on September 8th, making a start against the Oakland Athletics and earning the win. He made 10 starts for the White Sox over 1995 and 1996 before being dealt to the Toronto Blue Jays in August 1996. He would see infrequent action in each of the next three seasons with the Jays, with increasingly bloated ERAs drawing him his release in July 1998.