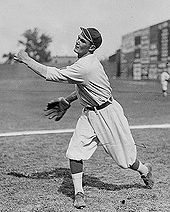 Gilbert "Lefty" Schegg (also known as Gil Price) did something quite unusual in his first major league appearance in 1912 - he was a LOOGY opener. He pitched to one batter in the 1st inning, got him out, and then turned over the mound to Walter Johnson. In his other major league game, he pitched five innings - in relief.

A SABR researcher came up with lots of details about Lefty [1]. He was signed by the Washington Senators in 1912 from a "famous baseball touring club". After his major league games he went to the minors, where he used his real name, Price. Regarding Lefty's first game, Senators manager Clark Griffith wanted to start Walter Johnson (going for a record) against the Cleveland ace Vean Gregg, so he wrote in Lefty's name, intending to put Johnson on the mound instead (Griffith thought Cleveland would not use Gregg in the game if it were known Johnson was going to pitch.) However, there was a rule requiring players in the formal lineup to actually play, so Schegg faced one man and was then pulled. The opposing manager, Harry Davis, let Gregg face one batter and then pulled him out. Davis then started Gregg in the second game as well.

Based on the researcher's information, it appears Schegg in the minors was Gil Price, whose middle initial was E and who went 21-9 for the 1913 Atlanta Crackers. Gil was by far the winningest pitcher on a team which won its league.