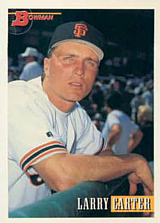 Larry Carter made six starts with the San Francisco Giants in the last month of the 1992 season, finishing 1-5 with a 4.64 ERA in 33 innings. He retired shortly thereafter, beginning a lengthy independent and minor league coaching career. In 2020, he reached the top of the mountain, named bullpen coach of the Kansas City Royals.