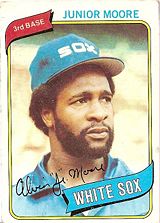 Alvin "Junior" Moore played five seasons in the major leagues with the Atlanta Braves and Chicago White Sox. He is listed as the regular third baseman with the Braves in 1977. Moore hit for a decent .264 batting average in the big leagues, although he had little power and didn't steal many bases.

Moore was born in Waskom, TX and attended high school in Richmond, CA. Drafted in the 11th round of the 1971 Amateur Draft, he was in the minors with the Braves organization from 1971 to 1976, several times hitting .300+. His first shot at the majors was in August of 1976, and he stayed up all of 1977 with the Braves. After the season he became a free agent and signed with the White Sox. Moore was in the minors for part of 1978 but not in 1979. In 1980 he was again in the minors part of the year for his last season there. Then he spent five years playing in Mexico.

Under his given name of Alvin Moore, Junior Moore later coached college baseball at both Patten University in Oakland, CA and Bethany College in Scotts Valley, CA. Moore was also a very popular player and manager in the Mexican minor leagues after completing his big league career.