Note: This page is for 1900-1910s outfielder Johnny Bates; for others with a similar name, click here. 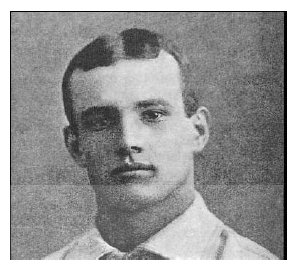 Johnny Bates played nine seasons in the majors with an excellent OPS+ of 122. A consistent player, he drew lots of walks during the dead-ball era and stole 187 bases in his career.

Bates was born and died in Steubenville, OH. An article from Sporting Life in 1913 (which includes a photo) says that Bates had eight brothers and four sisters. He apparently did not play professional baseball out of school, but instead worked as a glass-blower until 1905, when he joined the Altoona minor league club. Altoona released him after a month and he went to a team in Butler, PA, where he played well. The Boston Braves signed Bates, according to the article, and he sat on the bench until Del Howard was injured. Bates stated that for fun he liked hunting, and he claimed to have the best bird dog in the state of Ohio.

After his major league career, he played in the high minors for four years. The SABR biography of Dode Paskert mentions an article describing both Paskert and Bates as not very intelligent.