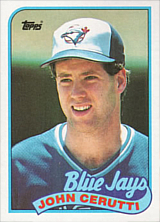 John Cerutti pitched seven years in the major leagues, mostly with the Toronto Blue Jays. He later was a Jays broadcaster.

After his playing career, John did his fair share of golfing, described as a top golfer. He was a Blue Jays broadcaster from 1997 until his death in 2004. He died at 44 on the last day of the regular season; his death attributed to natural causes stemming from a ventricular arrhythmia.