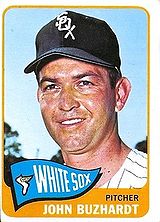 “The more I see Buzhardt, the more I’m reminded of Johnny Sain. He looks like Sain and acts like him and even walks like him. He’s all business out there on the mound.” - Alvin Dark, to Jerome Holtzman of The Sporting News 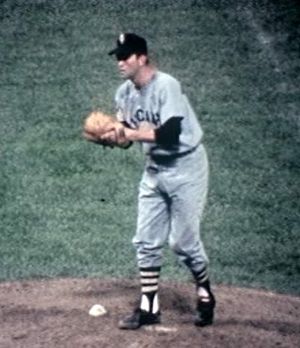 Pitcher John Buzhardt played eleven seasons in the majors, most notably as a member of the Chicago White Sox rotation in the mid-1960s.

After five seasons in the minors, where he posted a 59-56 record with a 3.98 ERA, Buzhardt first came up with the Chicago Cubs during the 1958 season and won all three of his decisions. After being traded to the Philadelphia Phillies in the deal that brought Richie Ashburn to Chicago, he was often the victim of poor run support with records of 5-16, 3.86 in 30 games in 1960 and 6-18, 4.49 in 41 games in 1961. He earned a win for the Phillies on July 28, 1961 in the second game of a doubleheader against the San Francisco Giants and on August 20, 1961, over the Milwaukee Braves. Between those two games, the Phillies had a 23-game losing streak, the longest in Major League history.

After baseball, John resided in his hometown of Prosperity, South Carolina, where he was a foreman for the Kodak Company. He died on June 15, 2008 at the age of 72.